If you’ve been following my Twitterfeed recently, you’ll know I’ve welcomed the pattering of tiny feet into my home.

Tiny, clawed, scaly feet. Four of them. And a nicely mottled carapace.

This is because my partner bought me a tortoise for my birthday. A tortoise!

I’ve always wanted one, mainly because they live for donkey’s tortoise’s years and so you get very good value out of them. I still think a tortoise is the best christening present you could ever give a baby. It’s a present for life!

So while this blog really should be about copywriting and social media, for once I’m going to allow a bit of personal stuff in. This isn’t purely self-indulgent either: several people asked how Concorde was getting on at the Jackenhacks recently, so I thought I’d let you know.

He’s doing fine! And here he is: 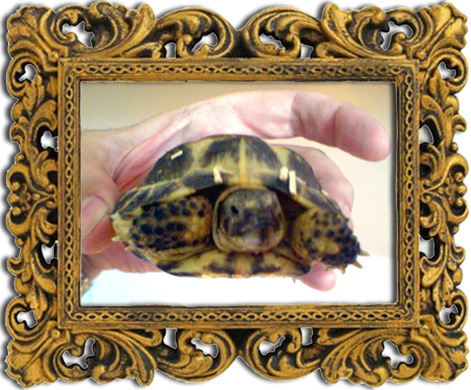 What a beaut. Although he’s a bit out of focus because he was struggling at the time I took the photo. They do that, you know, tortoises. They do tend to struggle. Well, don’t we all?

When I say ‘he’ I’m not sure if he’s a he or she’s a she. I’m not sure how you tell without getting unnecessarily intimate. The shell must be there for a reason, and I say that reason is to hide a tortoise’s modesty. Besides, the name Concorde works either way. It expresses elegance and finesse well, don’t you think?

A story: when the delivery man turned up he looked a bit nonplussed.

Then he dropped the box.

“But I don’t think they’re ‘live’ any more” quipped I. My, how we laughed.

He picked up the box. “I fink it’s a tortoise”, he said. And dropped it again.

At least now we were more informed. He didn’t have live reptiles, he had dead ones, specifically one dead tortoise.

Eventually when I’d rescued the animal from Royal Mail I took him (for the sake of argument) out of his little box. He thrashed about a bit – well, you would, wouldn’t you, especially if you’d been dropped twice in one morning – but eventually we managed to contemplate each other.

I admired his colouring and his scales, while he blinked and hissed at me. Then he hissed and blinked at Milligan the cat, who just sat there wondering if he would taste nice.

So that was a couple of weeks ago. Since then I’ve set up his little tortoisery complete with heatlamp (see left).

I’ve also been feeding him rose petals and spinach with a calcium supplement, giving him a little bath once a week (apparently you need to do this to help them hydrate properly, plus I don’t really want a dirty tortoise as a pet, I want a nice, clean one), and letting him gallop around the room for an hour or so at lunch.

I can’t really tell if he likes his bath – he just sits there looking a bit glum – but he does seem to perk up when he’s running around (see right). OK, crawling. To give him his due he can crawl quite quickly, like some sort of Mars explorer running off solar energy.

But then I can’t really tell what’s going on in his head at any time. I can’t tell if he’s happy or sad, or bored, or delirious. Let’s face it, I can’t even tell if he’s male or female. 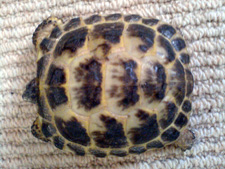 But it doesn’t matter. He’s a tortoise. Actually, he’s a mathematical tortoise. Count the plates on his shell (see left).

Do you see what I see? Three plates at the top, then six each side on the next row, then 12 on each side along the bottom. Clever little tortoise! If I find any more evidence of fractal design in him, I’ll let you know.

So, there you go. I might put some more pictures up as he grows – he’s only a hatchling, two years old, about the size of my fist, bless – and there may be videos to come if you’re interested. CarapaceCam? TortoiseTube? You decide!

7 thoughts on “Meet Concorde the Tortoise”