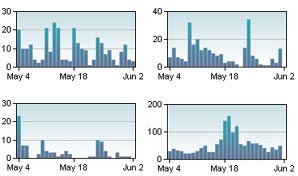 They were all competitors in the same industry. And yet the difference in presence in the blogosphere is quite striking. The company yielding the chart on the bottom right is using social media well, using all manner of approaches such as del.icio.us, YouTube and its own blog to create buzz.

You can see that there are smooth curves ramping up and down rather than sudden fits and starts, so there’s a ‘hedging’ effect here from using different techniques, making its buzz more stable and predictable. And it has much more blog buzz than its competitors.

Of course, as ever, so much is left unsaid. We don’t know what the sentiment behind the posts was, nor do we know how influential any of them were, or whether they signify any change in behaviour. That’s where the rest of the measurement comes in, and that’s generally where you’ll have to put in the effort of actually listening to what people are saying and responding to them.

But sometimes, charts startle me. These did. Sometimes, I swear the difference in performance in just one communications area must have a significant effect on business objectives – especially when we’re talking about a network effect in which messages cycle and pick up momentum.