Three days ago (so my del.icio.us account tells me – and boy, do I find typing del.icio.us tedious with all those fullstops) I bookmarked a beautiful example of trigger-response: the article by Tom Hodgkinson in the Guardian lambasting Facebook and all that he thinks it stands for; and Shel Holz’s video response on seesmic (better with audio!).

As a result, Shel Holz is virtually apoplectic (seesmic?), and counters Tom’s claims in his typically (for people who listen to the FIR podcast) articulate way.

But there’s the rub: I said ‘articulate’. Because Shel was articulating, not typing and editing and re-editing. And when I say apoplectic, well here’s a screen grab from the video: 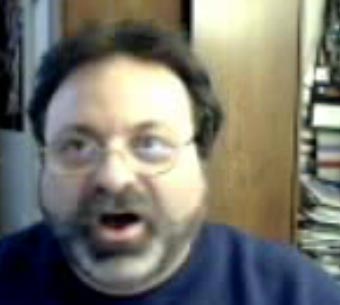 OK, maybe not apoplectic – as in, he’s not actually going red and keeling over backwards – but you can tell he’s fairly animated about it all. There’s another interesting word: animated.

Now, you could describe some writing as ‘animated’ but really, I could have read a transcript of what Shel was saying and forgotten it as it drowns in the sea of words I read every day.

But I don’t. I remember it simply because of all the other signals I was receiving, from the way he talked to the way he looked.

In fact, I remember Shel’s reaction much more vividly than I do Tom’s original piece.

So, I’m a convert. I do truly believe that video blogging has so much more impact than text or even podcasting that if you really want to communicate, you must do it.

Obviously there is still a place for the timid text bloggers like myself, and the audio podcasts you can zone out to during the daily commute.

But I’m going to keep an eye out – literally (not literally ‘out’, I don’t have a glass eye but you know what I mean) – for the rise of video blogging.

I’m going to monitor seesmic  (when they sort out my login problems) and similar sites (when I get the time to find them) and hopefully, my human brain, with its strongly audio-visual bias, will retain so much more than acres of text.